September 28, 2009 The Broome County Council of the Arts will name an actor-photographer, two theater directors and the founders of an art gallery as winners of the 2009 Heart of the Arts and Lifetime Achievement Awards at a news conference scheduled for today in the Forum Theatre Recital Hall.
For significant, long-term contributions to the arts in Broome County, Bill Gorman will receive the Lifetime Achievement Award.

For more recent contributions, the annual Heart of the Arts Awards will go to Tim Gleason, artistic director of Know Theatre in downtown Binghamton; Naima Kradjian, executive director of Goodwill Theatre in Johnson City; and Bill and Johanne Pesce, co-founders of the Windsor Whipworks Art Gallery in Windsor.

A formal presentation will be made to the winners at 6:30 p.m. Friday during the sixth annual Heart of the Arts Awards Celebration in the Forum Theatre Recital Hall, as part of the First Friday Art Walk. The event will feature a tribute slide show produced by WSKG’s Gregory Keeler. 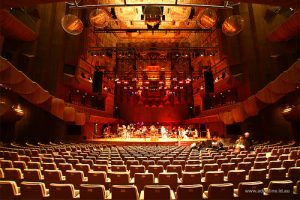 * Gorman has performed in more than 100 productions at the Cider Mill Playhouse since 1978, including the annual “Christmas Carol.” He is an original member and past president of Cooperative Gallery 213 in Binghamton, has assisted in numerous fundraising activities and currently serves on the boards of Binghamton Downtown Inc. and the Chenango River Theatre.

* Gleason founded KNOW Theatre with a group of other actors in 1992. As artistic director, he produced shows in a variety of temporary venues until the theater found a permanent home in 2006 at 74 Carroll St., Binghamton. He had been an advocate for downtown Binghamton revitalization and active in the First Friday Art Walk and First Night Binghamton.

* Kradjian has been involved in the Binghamton arts community since 1988. She is a co-founder of First Night Binghamton, a New Year’s Eve celebration of the Arts, is a former president of the Harpur Forum, served on the boards of many local arts and health-related nonprofit groups and has won many awards, including the 2003 Jefferson Award for Community Service.

* Bill and Johanne Pesce are co-founders of the Windsor Whip Works Art Gallery. They first vacationed in Windsor from Long Island, where he was an ad agency executive and she was a business educator. After he retired in 2006, they relocated to Windsor, where they purchased a building on the Windsor Village Green and spent five years renovating it into a gallery that has helped revitalize the area arts.